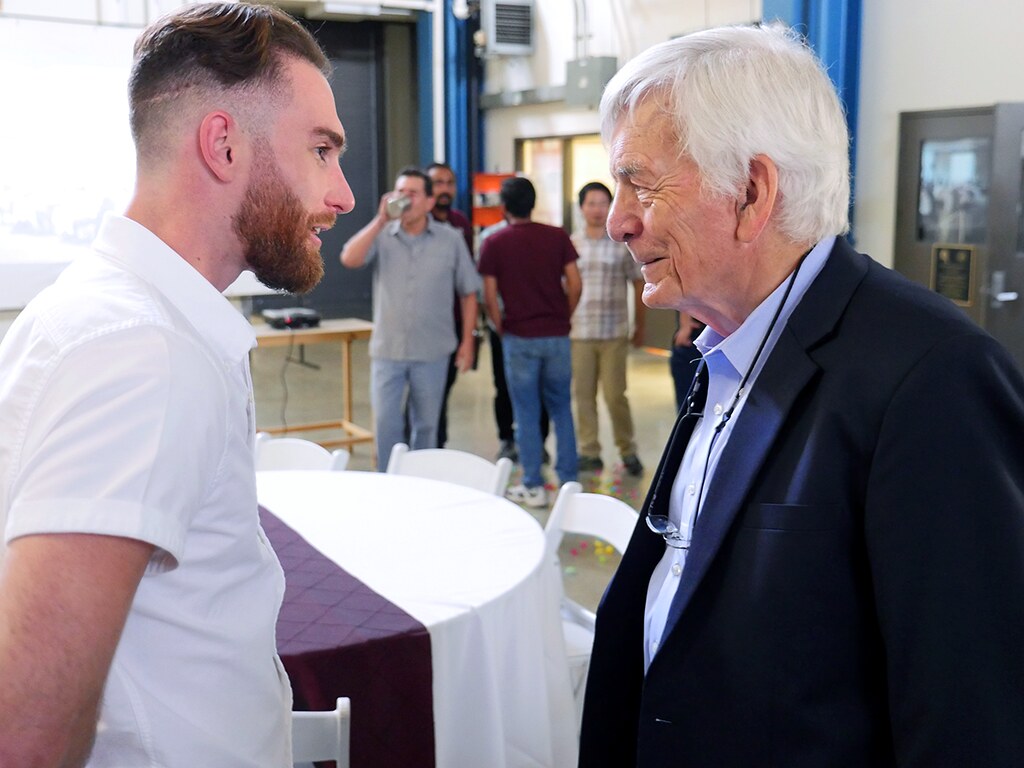 Not many people can say they owe their lifelong career success and worldwide professional reputation to instability.
Such is the case for Dr. Dara W. Childs, director of the Turbomachinery Laboratory at Texas A&M University. Childs’ critical thinking and wit combined with a smattering of good luck have molded him into a world-renowned giant in the turbomachinery and pump industries. After more than 55 years of research and teaching, Childs will step down as chair of the Turbomachinery and Pump Advisory Committees following the completion of the 46th Turbomachinery & 33rd International Pump Users Symposia (TPS 2017) in Houston. He will retire from Texas A&M in January 2018.

Childs got his start in NASA’s competitive American Society for Engineering Education (ASEE) program, whose focus was to develop the space shuttle main engine. Following a summer NASA-ASEE appointment at Marshal Space Flight Center (MSFC), he landed a contract with NASA-MSFC in 1975 to analyze the vibration characteristics of the high-pressure oxygen and fuel turbo pumps of the engine.
“They hadn’t previously considered the impact of the fluid forces on these things,” Childs said. “I found some work by this really smart, nice guy in Scotland named Henry Black that gave an outline for analyzing the seals. So I put together a model that had all of the fluid forces that you could think of were important, and the study showed that the hydrogen pump’s vibrations would be unstable.”
And, therefore, inoperable.
Childs handed over his report to NASA, but didn’t get the response he had hoped for.
“They said, ‘That’s really nice, Dara, we’ll call you if something happens,’” Childs said.
Several months later, while Childs was taking leave from his post as a professor of mechanical engineering at The University of Louisville to be a visiting faculty member at the Technical University of Twente in Enchede, The Netherlands, he began getting phone calls from NASA ASEE researchers.
“When they tried to run the space shuttle main engine, it was worse than I predicted. It was terribly unstable,” Childs said. “I said, ‘Look, do you want me to come back early?’ They said, ‘Yes, please.’”
The instability problem cost NASA one million dollars a day for six months. NASA offered Childs funding for a research program, and he began searching for a university at which to build it.
He inquired at The University of Texas (where he’d earned his Ph.D. in engineering mechanics in 1968) Oklahoma State University (where he’d earned his bachelors and masters in civil engineering in 1961 and 1962) and Texas A&M University. Harry Whitmore, former associate director of The Texas A&M System’s Texas A&M Engineering Experiment Station (TEES), welcomed Childs and his newly-acquired research program, agreeing to invest $35,000 in a data acquisition system.
“My research career was built from the one 1975 study I led that predicted the space shuttle main engine pump would be unstable. We got a flood of funding, including my colleague, Gerald Morrison. That’s why we’re in this building,” Childs said, referring to the 37,000 square foot high-bay Turbomachinery Laboratory research facility, adjacent to Texas A&M’s main campus.
Before the Turbo Lab research facility was erected in 1993, Childs and his turbomachinery colleagues were stationed in a World War II hangar on what is now the RELLIS campus. When Childs brought his NASA-funded program to Texas A&M in 1980, there were several other thriving turbomachinery research programs across the country. Now, there are programs at Ohio State, Penn State and Purdue universities, but they’ve downsized or closed due to a lack of funding.

The Turbo Lab at Texas A&M continues to flourish because of funds from the Turbomachinery & Pump Symposia (TPS), an industry-wide professional continuing education program and exhibition held annually in Houston.
Childs has chaired the TPS turbo and pump advisory committees since 1984, when he was named director of the Turbo Lab. The advisory committees consist of industry leaders who invite and hand-select the technical programs for the annual TPS.
“The association with the advisory committee members has been a real blessing,” Childs said. “Almost all professors end up working only with other professors, and I have the privilege of working alongside successful industry engineers. These advisors are the best in their fields in the world. The advisory committees are the single greatest resource that the Lab has.”
When Childs joined the committee, several of the founding members of the Turbo Symposium were a part if of it, including Aggie graduates Charlie Jackson and Ed Nelson. Jackson and Nelson spearheaded the first Turbomachinery Symposium, attended by 200 people on the Texas A&M campus. In 1984, Pete Jenkins, former Turbo Lab director, started the Pump Symposium. The two were combined in 2011 into a single event that has grown significantly over their 45- and 32-year histories, attracting more than 5,000 delegates annually.
“I am amazed at the things Dara has been able to do,” said Mike Drosjack, retired senior principal engineer with Shell who joined the Turbomachinery advisory committee in 1986.
Drosjack said Childs carried his “football attitude” into heated conversations during committee meetings. Childs attended Oklahoma State University on a football scholarship.
“He has this ability to manage these discussions, which could be pretty pointed, without getting furious with anyone. He’s very patient and skilled in these situations that were like herding cats…He’s a little bit cranky, but everybody loves him for it. They know his heart is in the right place.”
Drosjack said Childs’ technical reputation is admired globally. “He’s a technical wizard, he really is. He’s one of the top researchers for this industry in the world.”
Of all the things to know and respect about Childs, his love for his students and his “sense of purpose to teach the world” are most distinctive, Drosjack said.
Childs has ensured over the history of TPS that technical proceedings from each event are available online, for free, for the educational benefit of anyone who wishes to access them.
“He has never treated the symposia proceedings as a profit center,” Drosjack said. “One of the basic charters of Texas A&M is to teach people. That’s at the top of his pile. The fact that the symposia proceedings are available all over the world is incredible. Most other technical papers you have to pay for and formally request access.”

While Childs’ NASA ASEE grant was a pivotal moment in his career, much of the federal research support dried up with collapse of the Soviet Union. Childs and his Turbo Lab colleagues diversified and shifted to 95 percent private industry funds.
In 1984, Childs and the late John Vance, a rotordynamic researcher and former Texas A&M professor, co-founded the Turbomachinery Research Consortium (TRC). The TRC is an organization of major turbomachinery developers and users who join with the Turbo Lab to find answers to important questions about turbomachinery performance and reliability through research. The TRC has 38 member companies and 17 active projects, conducted by Turbo Lab graduate students and faculty.
Annual membership dues of $25,000, plus subsidies from TPS support TRC research projects and approximately 15 graduate students, annually.
“We want quality graduate students and we’re going to pay for them,” Childs said. “There are employers waiting to hire our students. We produce award-winning research papers, but the students are the ones who walk out these doors and represent us. They are the product of the Turbo Lab.”
The research productivity and capabilities of Turbo Lab faculty rivals that of faculty within any other department, Childs said.
“Much of that success is due to the base they work from,” he said. “We rely on compressors and other equipment in the Turbo Lab. All of this is possible because of the success of the symposia.”

Childs’ last day as chair of the TPS advisory committees is Thursday, Dec. 14, the final day of TPS 2017. Childs will be honored with a banquet dinner during the event, on Wednesday, Dec. 13. Childs extended his advisory committee retirement date three months when the originally scheduled TPS, set for Sept. 12-14, was rescheduled due to Hurricane Harvey.
“It’s been a really good run,” Childs said. “I had a good time. I have been in love with Texas A&M. I love the students. I love my colleagues. I am very grateful to Texas A&M for the opportunity to have a career here.”
When asked about retirement plans, Childs evoked a quote from former New Orleans Saints coach Bum Phillips: “‘I’m not doing a damn thing and I don’t start that ’til noon,’” he said, grinning.


It’s been a really good run. I had a good time. I have been in love with Texas A&M. I love the students. I love my colleagues. I am very grateful to Texas A&M for the opportunity to have a career here.